Mary, Mother of God, can be a real issue for some Christians and for many others, she’s a source of confusion. To some, praying to her is tantamount to idol worship, while others are left wondering, “so what’s the big deal about her?”

I fell into the latter camp. Even as I prayed the rosary, on Wednesdays and Sundays, while meditating on the Glorious Mysteries, I didn’t quite understand the fourth and fifth mysteries – Mary’s Assumption and her Coronation. Was she really that big of a deal?

To better pray the rosary and understand the Catholic faith, I took up a small study on Mary and found a wonderful book by Tim Staples called Behold Your Mother: A Biblical and Historical Defense for Marian Doctrines. I highly recommend reading it. Tim also has done some great interviews on EWTN  and the Coming Home Network (like this one and this one).

Tim does a wonderful job exploring Mariology, and his arguments are especially compelling as he is a convert to Catholicism and was once a man vehemently opposed to the Catholic doctrine on Mary. So I urge readers to pick up his book. Here, I’ll briefly trot out my three big hang-ups on Mary and dispel those using the research and arguments presented in Tim’s book. Then we’ll get into some simple but meaningful ways to include Mary in your faith life.

One thing to note before we begin, I think a lot of misunderstanding about Mary boils down to two main points:

Hang-Up #1: Even after she gave birth to Jesus, how could Mary stay a virgin? After all, she was married!

Yes, she was already married to Joseph (not just engaged) and yet had not consummated their marriage. Why? Because she had already taken a vow of chastity, which wasn’t unheard of in Jewish life or in the Old Testament. “How shall this be, for I know not man?” Mary asks when the Archangel Gabriel tells her she will conceive God. Up to this point in their conversation, Gabriel had not told her it would be a non-sexual conception nor if it would happen immediately or at some unspecified future time. She could not have known that it would be. So she asks if it’s possible given her vow of virginity.

If Jesus was born in a virgin birth, then surely, Mary and Joseph would have gone on to have conjugal relations and had other children. The Bible mentions Jesus’s brothers so surely this must have been the case. However, there would, then, have been no reason for Jesus, while on the cross, to give Mary to the apostle John. “Behold thy mother,” He says. But if He had uterine siblings, there would be no reason to entrust Mary’s care to someone outside of the family (see Mark 7:9-12). As for use of the term “brother” in the Gospels to indicate that Jesus had siblings, this goes back to differences in language.  Catholic Answers has a great in-depth look at this common objection to Mary’s Perpetual Virginity.

Finally, Mary was espoused to the Holy Spirit. This union took precedent over the one she had with Joseph, who, in a much different time, place, and culture, was a necessary earthly protector of Mary. She simply could not safely have conceived out of wedlock in a culture that placed heavy consequences on such an occurrence.

Hang-Up #2: Where in the Bible does it say Mary’s body was assumed into Heaven?

The book of Revelations, that final, storied, and confusing final book of the Bible, tells us a lot about Mary. Here, she – “the woman” – is bodily in Heaven. Mary is also the ark of the New Covenant. And the ark of the Old Covenant, the ark that held Moses’s stone tablets was incorruptible. If the wooden ark could not decompose, then why would God allow the new ark, the human ark, do so?

As for the Assumption not being explicitly included in the Bible, let’s remember that our Christian faith requires a blending of written and oral tradition. In the second letter to the Thessalonians, Paul advises just that: “So, then, brethren, stand firm and hold to the traditions which you were taught by us, either by word of mouth or by letter.” The authority of the Catholic Church is today’s oral tradition passed down.

(Side note concerning Mary’s sinlessness: Remember that Eve was sinless, yet she brought death. Therefore, it would only be logical and fitting that the New Eve, who brought life, would be sinless also).

Hang-Up #3: Paying attention to Mary takes our attention away from Christ. He should be our sole focus.

I love this quote by Tim Staples: “Like the moon in relation to the sun, Mary is not the light. She is the most perfect reflection of the light.”

Mary shows us what Life, not Death, looks like. She is a great role model, an aspiration for every human, a showing of what, with God’s saving grace, we can – and will one day – be. By respecting Mary (No, not ever worshiping her), we respect what God to work through and in all of us. He freed Mary from sin. She is a beacon of hope and light for  humanity, once we are finally freed from sin, once and for all. Mary doesn’t take our focus away from Christ. She helps us to better understand what God has in store for us should we give Him the worship, faith, and love He is due.

3 Ways to Include Mary in Your Faith Life 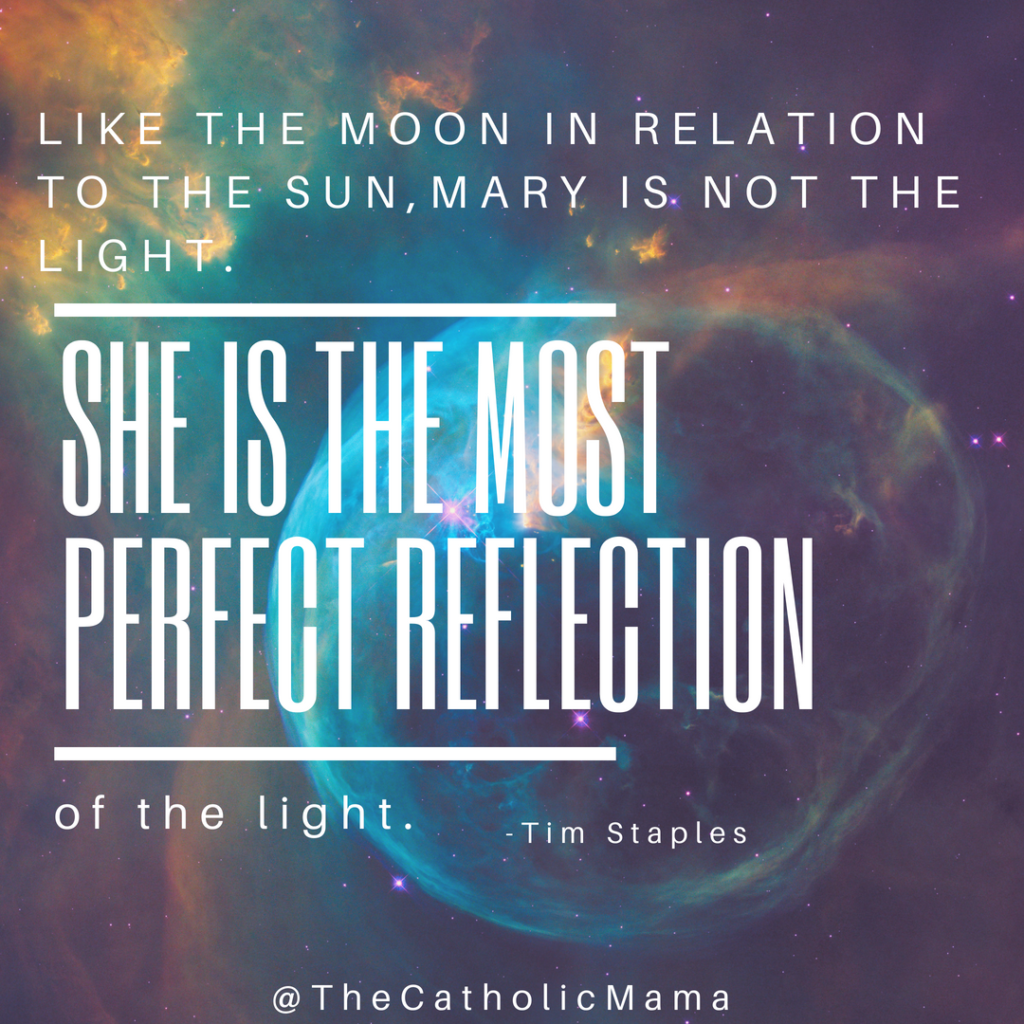 Resources:
Tim Staples, Behold Your Mother: A Biblical and Historical Defense for Marian Doctrines
Pope John Paul II, “To Honour Mary Is to Go to Jesus”

Don’t forget to grab a FREE copy of my eBook, “How to Talk to Your Kids about God” HERE.

EP 124: Why Catholics Should Stand Against Socialism

EP 152: From Muslim to Catholic and Everything in Between with Jane Manka